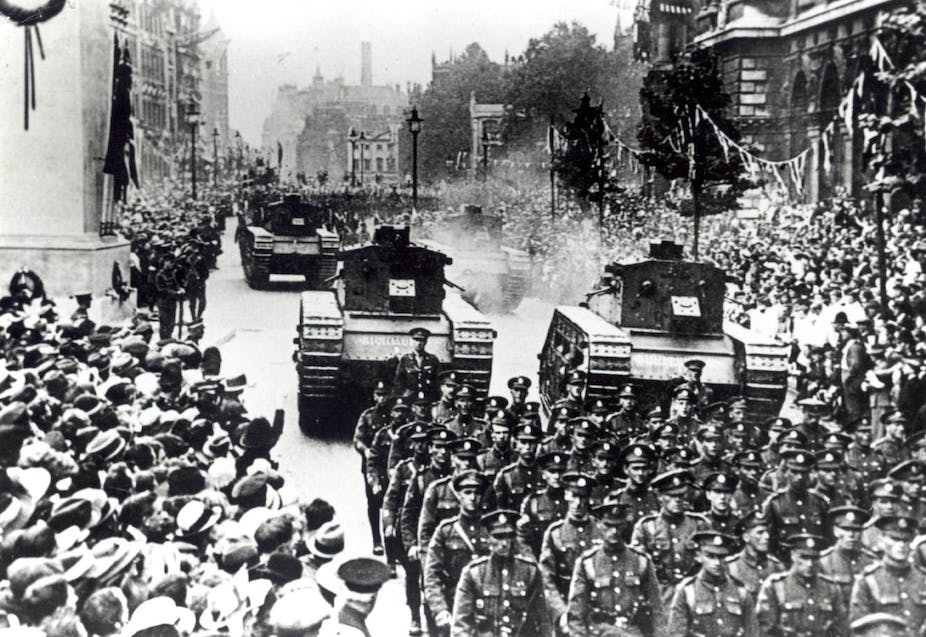 The 1919 Victory Parade passes down Whitehall, to mark the end of World War I. PA Archive/PA Images

11am on November the 11th, 1919, a great silence fell over the British Empire. Everywhere people stood silently: in their workplaces, on the street, assembled in public squares, before war memorials and in churches from Sydney to Ontario and New Delhi to Edinburgh. At the Cenotaph in London, visiting Australian Methodist minister J. W. Burton recalled that the crowd was overwhelmed by an “awful silence”, which “was so intense that the flutter of the pigeons’ wings away above us in the calm sky seemed to deepen it”. For two minutes people were united by the silence.

In spite of all the divisions and pain caused by the war and regardless of political or religious differences, the simple act of pausing for quiet remembrance became the most successful monument to the dead.

Symbolically marking the first anniversary of the signing of the armistice, which concluded World War I, the first two minutes silence was intended to bring together a grieving empire. More than a million servicemen and women had been lost, many more had been injured, and families and communities were grappling with the upheaval to their lives.

The social dislocation caused by this mass sorrow was made worse for those who had lost loved ones abroad and were denied the ordinary practices of mourning, such as funerals with all their traditions and comforting rituals. Although the Imperial War Graves Commission was established in 1917, many would never be able to see the final resting places of the dead.

As the first anniversary of the end of the war approached, the Imperial government was faced with how to mark it. The proposal for holding an empire-wide silence was brought to the attention of the British Imperial cabinet by the colonial secretary, Lord Milner. Milner had been lobbied by Sir Percy Fitzpatrick – a South African politician inspired by the three-minute silence daily observed in Cape Town after the noonday gun. In a letter to Milner, Fitzpatrick emphasised the symbolic power of two minutes, where there would be “from the heart of the empire to its uttermost limits, just silence and remembrance”.

There was a reason to believe the silence would be successful. Similar silences had been held throughout the war, in England, South Africa and Australia. In 1916, an Anglican clergyman in Australia, Canon David Garland organised two-minute silences as part of an ANZAC Day commemoration. His innovation had been to treat it as an ecumenical moment – a bringing together of people from different religious traditions. Silence bridged sectarian differences as Protestants disavowed prayers for the dead, and Catholics could not be led in prayer by non-Catholic clergy. For the same reason, the silence was also inclusive of the many Muslims, Hindus, Sikhs and others in India and the rest of the colonial empire that had contributed to the war effort and suffered great losses.

On the day, things proceeded smoothly, with bells and factory whistles and other arrangements working to synchronise the silence. The effect, a writer for the Brisbane Courier, now The Courier-Mail, noted was a remarkable sight as: “Commerce was suspended, traffic came to a standstill, trains and trams ceased running, and the community observed a solemn prayerful silence, calling to mind the mercy of God and the heroism of her sailors and soldiers.”

A Times correspondent riding a London bus that had stopped spoke of how the sheer force of the collective emotion of the moment confounded cynics. Others reflected that it offered “a glimpse into the Nation’s soul” and that as life slowly resumed, things had been permanently changed by the silence as the private loss of the “humble widow” became public, shared now by everybody.

The two-minute silence continues to be successful because it is a simple collective act. For the first silence, all it took was a command from the king for everything to cease. So that: “In perfect stillness, the thoughts of everyone may be concentrated on reverent remembrance of the Glorious Dead.” It was short enough to focus the mind but long enough to mean something. It was later rumoured that the Grenadier Guards were enlisted for an informal rehearsal of silences of varying length, where it was decided that two minutes was ideal.

A century on, people still gather and observe two minutes of silence. The dead of subsequent conflicts joins the legions of the lost remembered in that hallowed quiet. Its universality has led it to become a powerful response to many human tragedies, like after the July the 7th, 2005, London bombings, or on the anniversary of the 1989 Hillsborough disaster. The enduring success of the two-minute silence is for the simple reason that, as for the millions across the British Empire who fell silent in 1919, there are some moments when there are no suitable words to collectively express the emotions we might feel. There is poetic solidarity in silence.