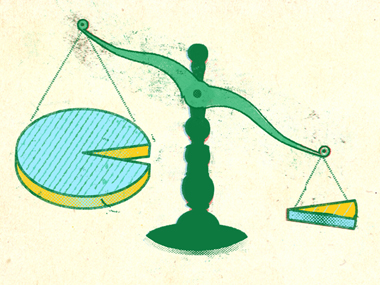 We see a lot of grandstanding on inequality.   But this is useless and misleading when the wrong reasons are given for such high disparities.

So what are the facts, and how do they differ from the rhetoric?

The biggest reason for the inequality we see in South Africa is the very high proportion of households without both parents.

The facts speak for themselves:

Of the thirty-six countries in the world which have one third or more households with a single parent, some thirty (or eighty-three percent) also have a Gini Coefficient of over forty.     (The Gini coefficient is the most widely-used measure of inequality)

All of these thirty countries have measured a Gini in the last two decades.

Meanwhile, look at the forty most unequal countries in the world.  You will discover that an overwhelming thirty-nine of them have above the global average for the proportion of single-parent households!

If we look at this another way round, the numbers tell another dramatic story.

In thirty-one of the forty most unequal countries, we see over thirty percent of all children aged under fifteen living in single-parent homes.

This incredible fact is never really written about, or discussed, very much.

However, if you look at the rich countries – which also tend to be more equal – they have about seventeen per cent of children staying in single-parent households. Of these, eighty-eight percent are female-headed.

In the rest of the world, we see that, on average, thirty percent of children live in single-parent households.

All five SACU countries are included in the list of the ten most unequal countries in the world, as can be seen in the table below:

No SACU country has more than 42% of children living in a two-parent household!

Some fourteen of the sixteen countries in the Southern African Development Community, (SADC) are included in the forty-six most unequal countries in the world. Mauritius and Tanzania are the only ones in SADC which are not to considered very unequal!

This is rarely discussed in the public domain, but it is a fact.

Judgemental observers, who may often have a hidden agenda, fail to realise a major cause of poverty and inequality in the SADC countries is the high numbers of children living in single-parent – or even in no-parent – households.  Often this is from the impact of HIV.

Even though almost one-third of children in many countries are raised by a single mother, it is relatively difficult to find detailed data on single-parent trends and statistics, whether worldwide or nationally.

It is obvious, though, that it is far harder for single parents to make ends meet. They have to divide just one parent’s time and effort between bringing in an income and raising their children.   This is never easy.

In my opinion, the data is clear in demonstrating that the major cause of inequality is a high proportion of children living with a single parent. Unemployment, of course, is another major factor, and I will return to this in a later article.

I am amazed that so little research has been dedicated to the role of those families which are not headed by both parents.

A consequence is that when inequality is discussed, it often tends to be wrongly blamed on high earners, or on the colour of one’s skin

If we do not address the number of families without two parents, we could change every pay structure by 180 percent – and South Africa will still be one of the most unequal countries in the world!

Talk about myths and slogans.   This is the worst grandstanding we have done in South Africa and it has wronged both the citizen and the debate!

Mike Schussler is a leading economist and number cruncher.  He heads economists.co.za