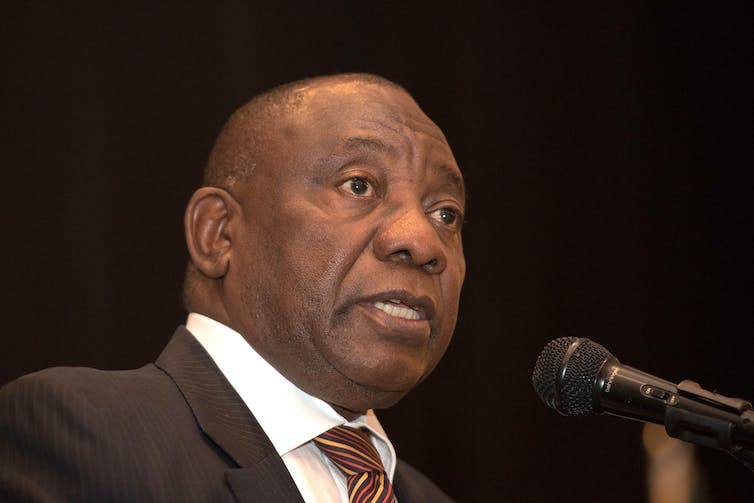 Susan Booysen, University of the Witwatersrand

The spotlight will be firmly on South African President Cyril Ramaphosa as he runs the gauntlet of delivering the annual state of the nation address on behalf of the governing party, the African National Congress (ANC), and his government on Thursday.

This year’s speech is light-years removed from the promise of a new beginning he offered in his first state of the nation address in February 2018. This was delivered soon after he took over from Jacob Zuma. The hope then was that constructive new policy initiatives and definitive repair of damaged state institutions would emerge.

In contrast, all indications are that South Africa’s political and financial landscape is parched. Yet it is Ramaphosa’s job in the state of the nation address to highlight the silver linings. It is, after all, a pre-election year. South Africans go to the polls to elect a new local government in 2021.

Ramaphosa will undermine his own prospects as well as those of the ANC if he and the governing party cannot create reasons for voters to keep on believing that the ANC is able to bring change.

This won’t be easy given the odds are stacked against the government having what it takes to fix South Africa’s problems. There is growing cynicism among citizens – and a good reason for the despondency.

Many of the country’s problems have become intractable: political and economic conditions in the country remain stark. And the areas of action and hope identified last year have not responded favourably to the promises that were made and plans that were announced.

In fact, there has been a regression.

Despite this, the president needs to present new approaches and put a fresh spin on the ANC’s stabs at stubborn problems. He needs to offer assurances that the core problems are being addressed on a scale that will make an actual difference.

The set of interrelated issues that beg to be addressed definitively in this year’s speech, Ramaphosa’s fourth, include:

This set of problems, at a minimum, need definitive announcements that will show that the ANC government is capable of extracting South Africa from the quagmire.

Ramaphosa and his government need to reallocate funds to make the necessary interventions work and ensure improved state efficiency and effectiveness.

It is a tall order.

But who is in charge?

The challenge to deliver a persuasive speech comes firstly in the context of intense doubts as to whether Ramaphosa is truly in charge of the ANC. Or who else is, if he’s not.

ANC secretary-general Ace Magashule and his faction, acting as the actual political opposition, has only got a fraction of the popular support that Ramaphosa has. Despite agitation against Ramaphosa within the ANC, he remains the pull factor that brings the party more popular support than it would have without him. He helps the ANC retain its dominance.

Read more: Public approval is Ramaphosa’s only defence against his enemies in the ANC

But this may not last. His acrimonious legal fight with the country’s Public Protector Busisiwe Mkhwebane could very well dent this.

The ANC’s factionally-indulgent policy wars, whether on land reform or stake-holding and mandate of the SA Reserve Bank, also advance the perceptions of ANC weakness and leadership indecisiveness.

Major surprises during the state of the nation address have also been minimised by the fact that the ANC has been through a thorough internal process to identify key policy areas, and what it wants to focus on.

This process started on January 8 when Ramaphosa delivered the ANC’s annual anniversary statement. It highlighted the priorities of the ANC-in-government for 2020.

This was followed by a meeting of the ANC’s national executive committee, the party’s highest decision-making body in between its five-yearly national conferences. Speaking on the outcome Ramaphosa assured South Africa that the party deliberations had

forged a clear and concrete programme to address the challenges the nation faces.

He admitted that the ANC had “fallen short” in implementing its policies and had “devised realistic measures to address these”.

The next step in the process was the adoption of a set of proposals by the ANC’s national executive lekgotla. This annual gathering precedes the cabinet lekgotla and informs the agenda of the government for the year ahead.

The plans that emerged were recognisable from previous plans. These included the proposal to rationalise state-owned enterprises. For example, the unbundling of Eskom, the troubled power utility, seemed to gain momentum from the national executive committee and lekgotla deliberations.

What exactly the outcome will be remains unclear, however, as the labour federation Cosatu, has tabled its own plan. This is against unbundling Eskom. Cosatu is the ANC’s governing alliance partner, along with the South African Communist Party. Its proposal for the power utility appears to be gaining momentum.

Further signs that the ANC is still not singing from one hymnbook came days earlier when Gwede Mantashe, the Minister of Minerals and Energy and in the top leadership of the ANC, floated the idea broadly of establishing a new government-owned electricity company and permitting businesses to generate power.

All this points to the fact that energy can be expected to be one of the state of the nation address pivots.

Ramaphosa’s state of the nation address options are limited. Shrinking numbers of South Africans believe the ANC has solutions that would justify trust in the government.

A small way out for the ANC in 2020 going into 2021 will be to ensure that civil servants remain in their jobs. That will go a long way to ensuring that Cosatu remains a loyal governing alliance partner.

Another way out for governing party is to make sure that the social grant system, which benefits 17 million South Africans, remains lubricated and that Eskom keeps the lights on.

But given the enormity of what needs to be done, and what Ramaphosa can actually achieve, the state of the nation address is unlikely to confound the cynics.